This was our last full day in country, so we started the day off by saying goodbye to Villa 35 and then we were on our way to Dublin. We checked in at the Croke Park Hotel and purchased tickets for Dublin’s hop on/hop off tour bus from the concierge. Our group decided to split up while we were in Dublin since we all wanted to see different things. I was in Dublin in 2004 and there were certain things that I was willing to see again, and others that I wasn’t all that interested in seeing again. Tom and Winnie really wanted to go to Trinity College and see the Book of Kells; Rob really wanted to go to the Guinness Storehouse. This one was a no-brainer….Guinness wins! I had been to both Trinity College and the Guinness Storehouse in 2004, but I was definitely up for going back for the freshest Guinness around. So we all boarded the hop on/hop off tour bus together, but then we went our separate ways and got off at different stops.

Rob and I started out our day in Dublin by having lunch at a really great pub called Gallagher’s Boxty House in the Temple Bar area of Dublin. We had a pint and a really delicious lunch special. We really enjoyed our time with Tom and Winnie during this vacation, but it was really nice to have some time by ourselves by this point of the trip.

Our next stop was the Guinness Storehouse and I was happy to find out that some things about the tour had changed since I was there last. One of the additions is their Guinness Academy, where they teach you how to pour the perfect pint of Guinness. Of course, we had to check that out! We are building a bar in our basement at the moment, so we need to make sure we are properly trained in case we ever have Guinness on tap. I was surprised to learn that there is actually more to it than you would think and it would be really easy to mess up if you didn’t know the proper steps to pouring a perfect pint of Guinness. We passed the test and even brought home our cheesy souvenir certificates. But the proof is in the pint! And it was delicious! 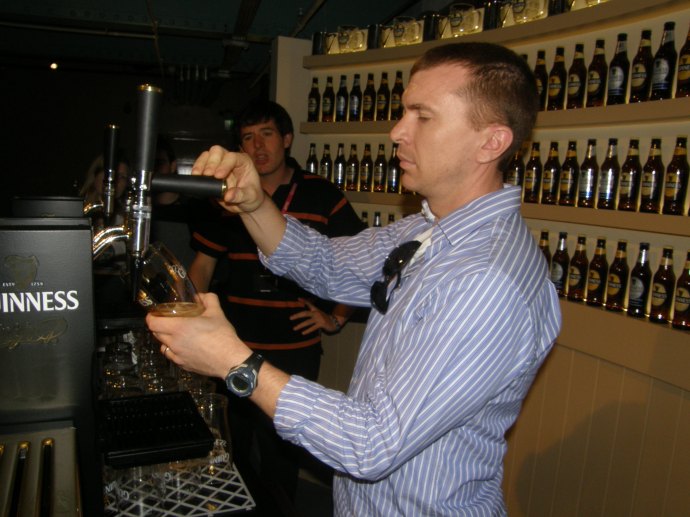 After we sailed through the academy with flying colors, we headed up to the Gravity Bar for our 2nd pint on this tour. The Gravity Bar is completely enclosed in windows and it is usually a great spot to check out Dublin from above. However, it was another rainy, dreary day with grey skies, so the views weren’t exactly at their prime. Rob and I enjoyed our beverage, had time for a quick photo op, and then we had to bolt for our next booze spot. 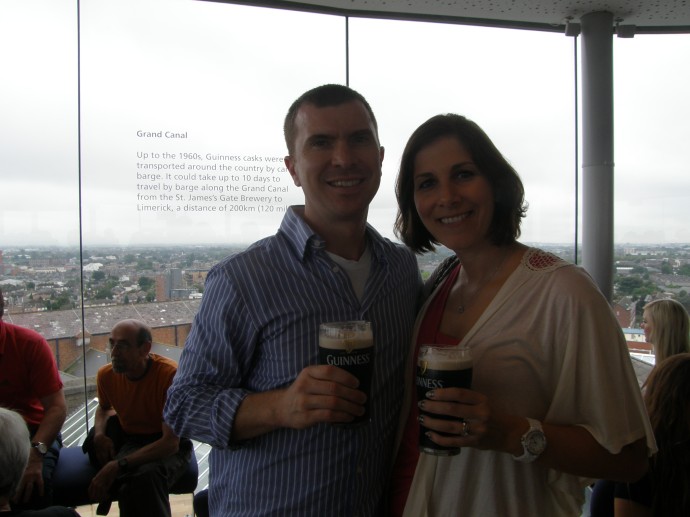 On to the Jameson Whiskey Distillery! This was something that I didn’t get to see the last time I was in Dublin, so I was really excited to see something new this go around. We were cutting it really close to make it there in time for their last tour of the day. When we got there, the last tour had just started about 5 minutes earlier and I was super bummed because I thought we missed our chance. But apparently, the first part of the tour is a short film, so we were able to join the tour group in the theater having only missed a few (non-essential) minutes of the film.

I knew absolutely nothing about whiskey, so the tour was pretty informative. For instance, Irish whiskey is distilled 3 times, giving it a much more smooth taste. Scotch whiskey is typically distilled 2 times, while American whiskey is only distilled 1 time, which makes it the harshest of the bunch. At the end of the tour they offer you a tasting of Jameson. I didn’t think that I liked whiskey prior to this tour, but I was wrong. Apparently, I just don’t like American whiskey. Jameson was delicious and smooth like honey! Who knew?

After our tour we headed back to the Temple Bar area and the plan was to eat dinner at a pub that had live traditional Irish music. We found a table at the Merchant’s Arch, ordered dinner and a pint, and then waited for the music to begin. The first act was actually an American musician from L.A. that performed American cover songs. He was pretty good, but not exactly the kind of music we were hoping for. Finally, at almost 10 p.m. the Irish performers took the “stage.” A guy on guitar and a woman on the fiddle, and they were fantastic!! The music was great, the Guinness was good, and I wanted to keep the party going. Unfortunately, we had to get some rest so that we could get up for our flight in the morning. Despite how much fun I was having, we did the responsible thing and headed back to the hotel to get some sleep. Luckily, Rob had just enough euros left in his pocket for us to get a cab ride home.  Perfect end to a wonderful vacation!