For Valentine’s Day in 2011, Rob bought me a gift certificate for a hot air balloon ride which was something neither of us had ever done before.  We scheduled the flight for late last summer, maybe early fall, I can’t quite remember.  We were scheduled for a sunrise flight, which meant we had to meet the pilot at 5:40 a.m. in Woodstock, Va, which is very far from home.  To make things easier, we spent the night before at Tom’s house in Front Royal to shorten the morning commute.  The next morning, we met the pilot and then headed to a recreational park to get things set up.  It was really foggy that morning, but our pilot was hopeful that the fog would clear up in time for our flight. 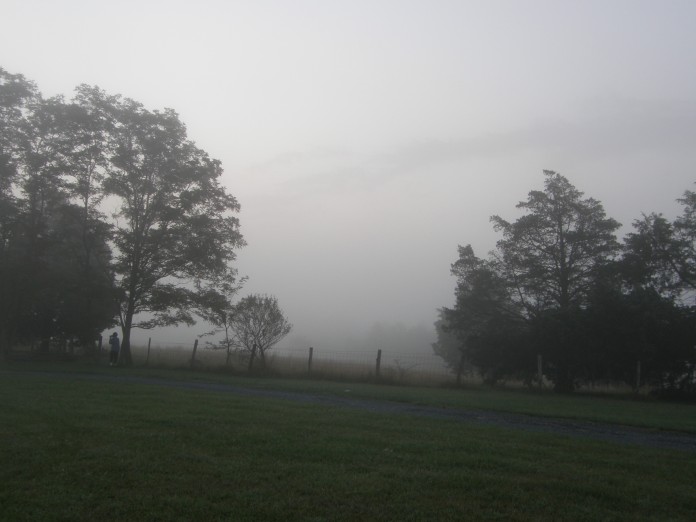 Rob helped get the balloon ready for flight. 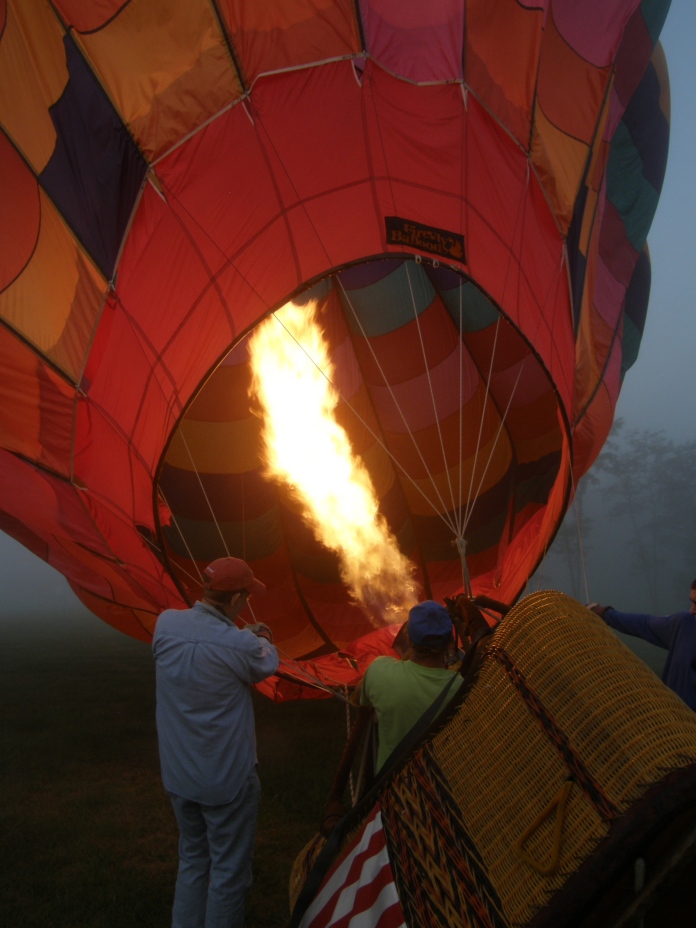 About 20 minutes later we were ready to go up.  It was just 3 of us in the basket; me, Rob and our pilot, Don. 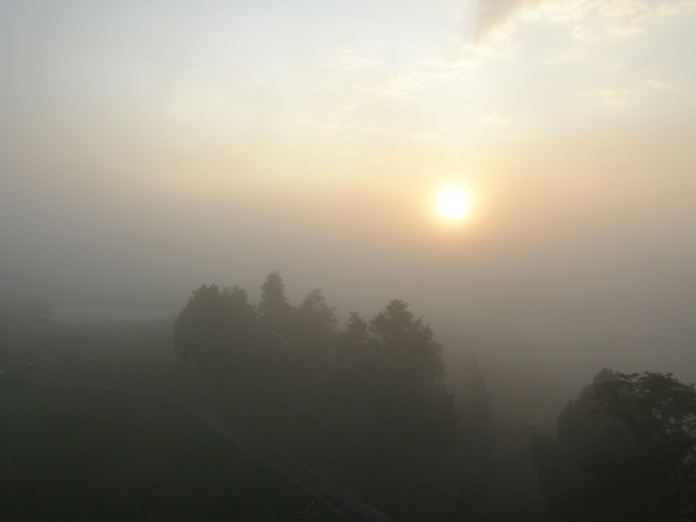 Fast forward about a year and we were ready to try this again.  We were scheduled for another sunrise flight which meant another very early morning.  Once again, Tom was kind enough to host us at his house.  Still, we had to wake up before the crack of dawn, 4:30 to be exact.  We then headed to meet our pilot (still Don), once again at 5:40.  We went to the same recreational park to begin the setup.  It was a bit foggy, but nowhere near as bad as the first go-around. (Notice the difference between the picture below and the same shot from last year.)

There were probably cows there last year too, but we definitely couldn’t see them!

We went through the same process for setting up the balloon.  Rob was a good trooper and helped out with the setup again.  I would have loved to help but, somebody had to be the photographer!

Once the balloon was set up, it was time to try this again. Rob and I joined Don in the basket and away we went.

We got up above the tree line and once again we were surrounded by fog! 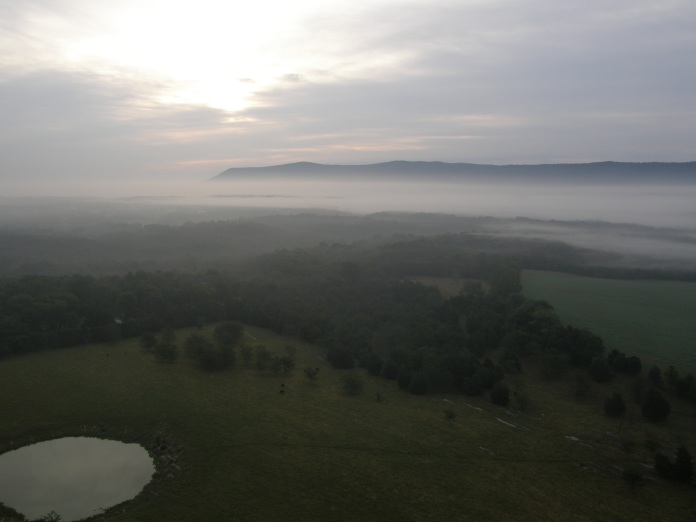 Don quickly told us that we might not be able to fly due to the fog. Rob and I looked at each other thinking, “you have got to be kidding me!”  Don assured us that this almost never happens.  He told us that it has been about a year since the last time he has had to ground because of fog. Rob chuckled and reminded Don that we had been in this same exact position about a year ago and we were grounded due to fog. That seemed to refresh Don’s memory and he said he remembered us and thought that we might have been the patrons that were the last to get grounded!  We couldn’t believe our luck. What are the chances?  The thought of waking up that early and driving all this way for a third time sounded awful to me. I think I might have been ready to scrap the whole idea and hope for a refund. But before we knew it, the fog was starting to clear on one side giving Don a safe path to travel. 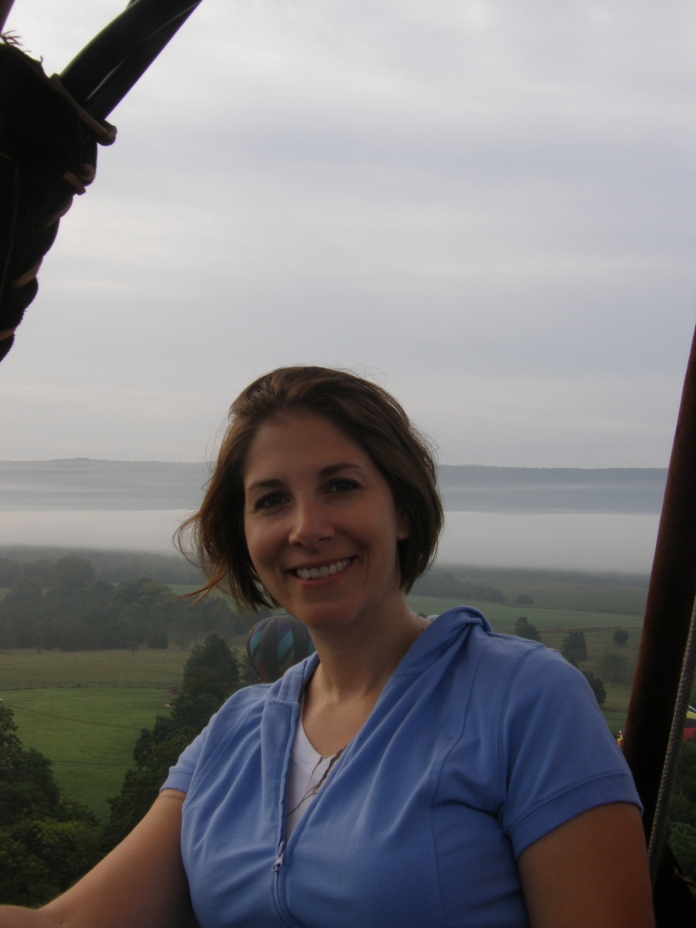 There were two other balloons going up that morning, but we were the first to get up in the air.  So we got to watch them from above. 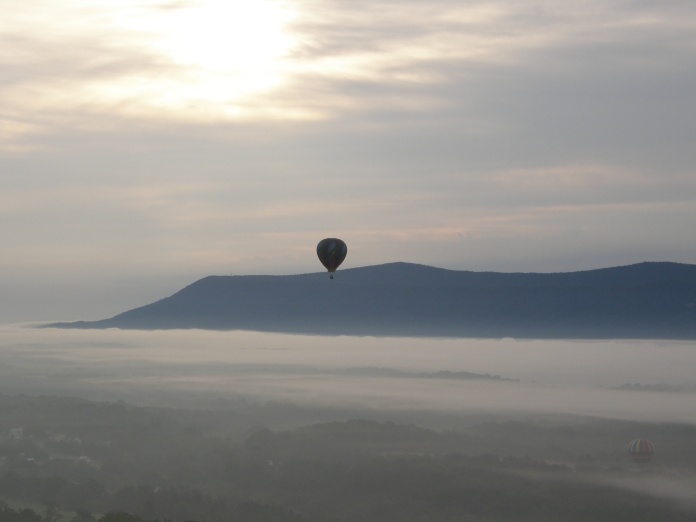 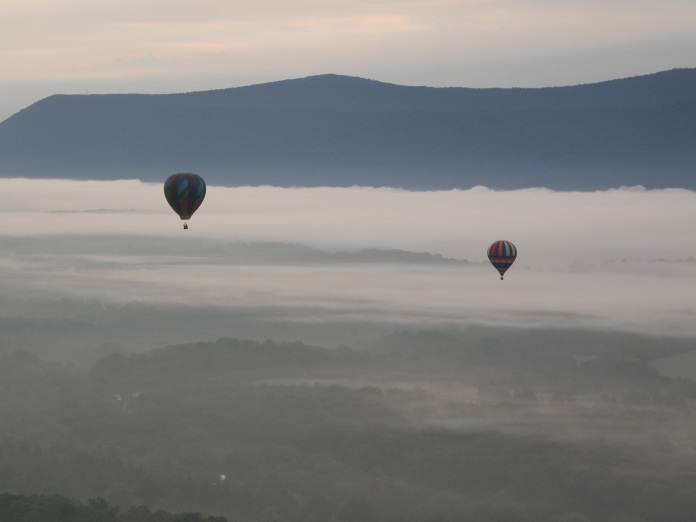 Even though it was a bit foggy, we still really enjoyed the view.  We had the Massanutten & Blue Ridge Mountains on one side and then the Allegheny Mountains on the other side.

The highest we flew was about 1,000 feet and the fastest we went was about 10 mph.  I didn’t think that animals below would really pay much notice to us floating above them, but dogs ran around their yards and barked at us and several herds of cattle ran for cover!  We flew over some people that were relaxing on their deck and we waved back and forth.  Our flight lasted about 45 minutes and then we found a safe place to land, which just so happened to be someone’s front yard.  As soon as we landed, we swapped out of the basket with another couple that were scheduled to fly after us. 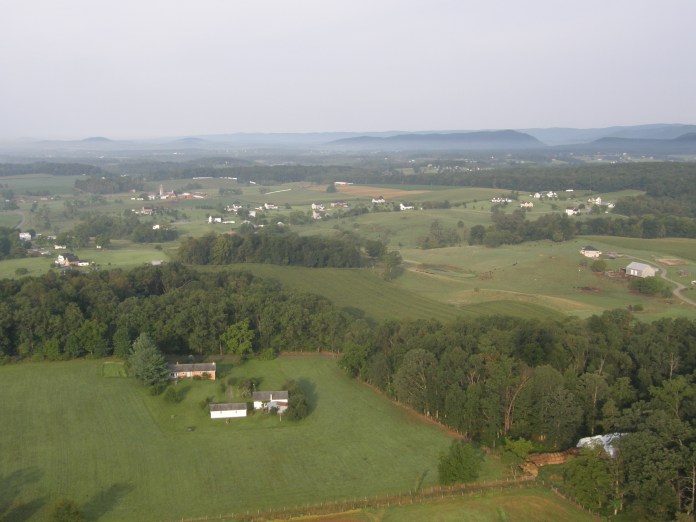 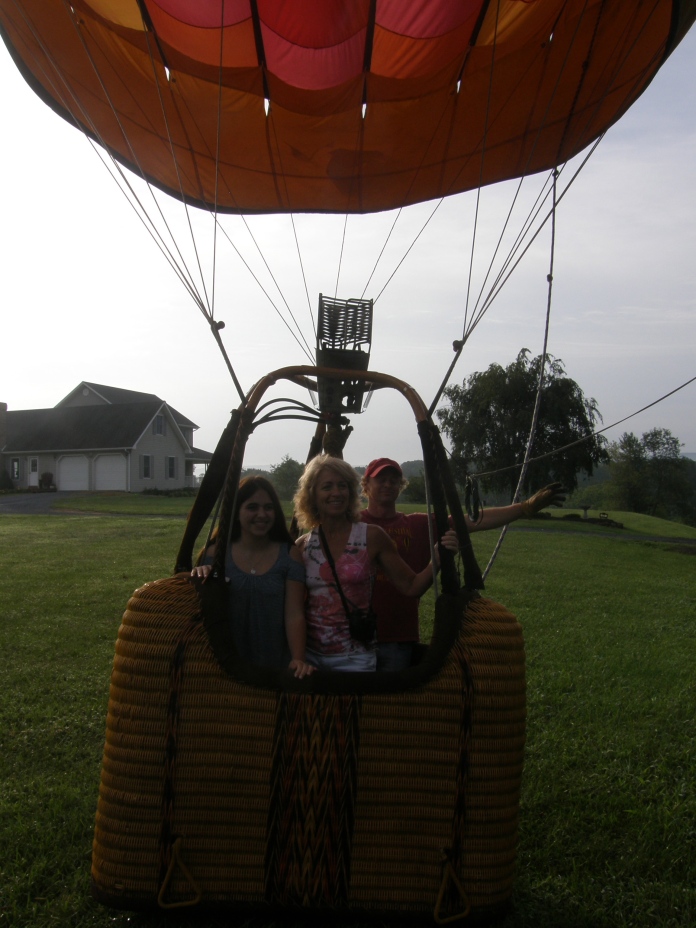 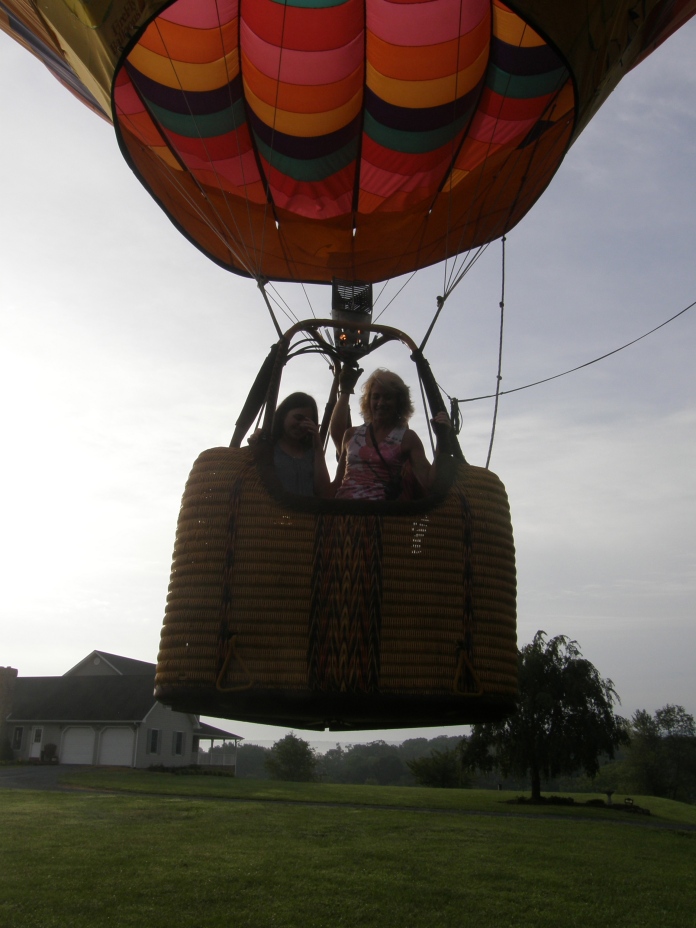 We just happened to be standing by the location that one of the other two balloons was about to land, so Rob went over to assist them with their landing. 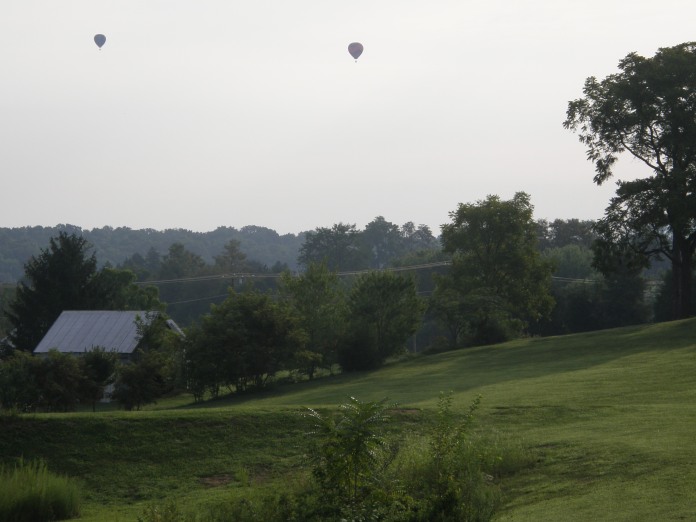 Meanwhile, Don missed his initial landing zone.  He was hoping to land on the other side of those trees, but he overshot it, so the crew had to rush to the other side to assist him with the land. 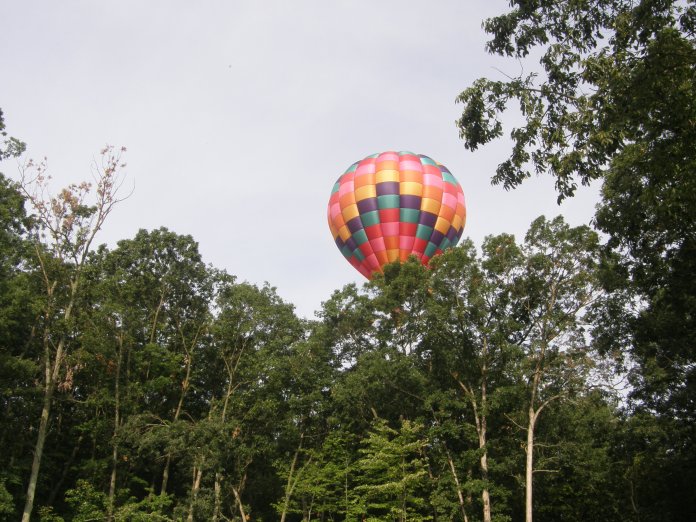 It was a precarious situation and required Don to throw a tow rope down so that people could help guide the balloon in the right direction so that he wouldn’t crash into this person’s house!  I am so glad this is not how our landing went! 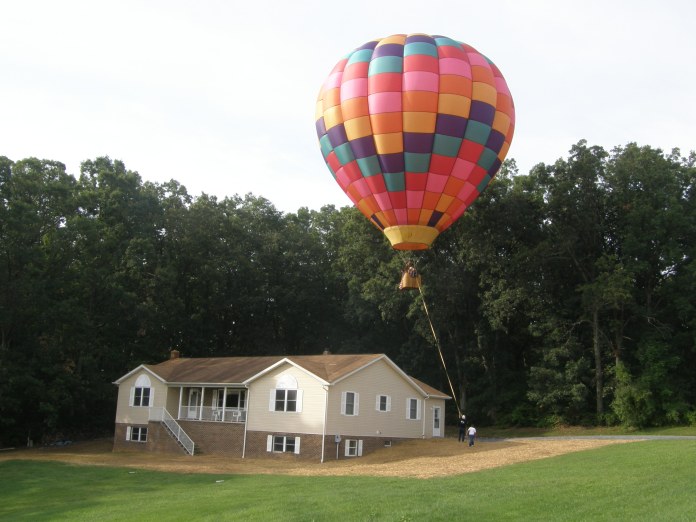 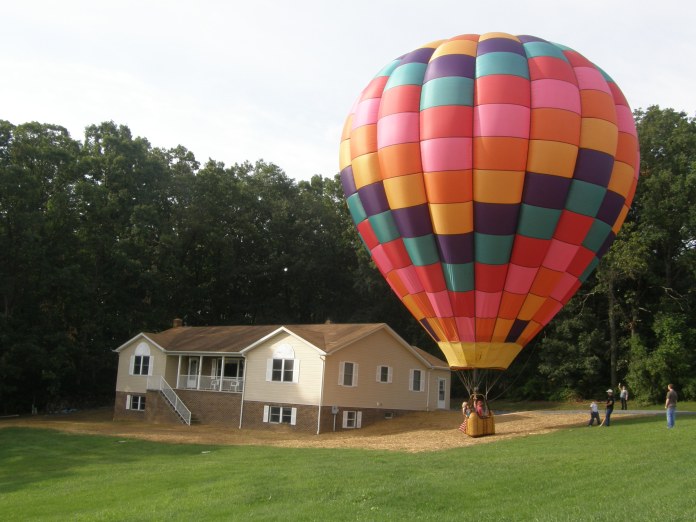 Thankfully, it all worked out and they landed safely.  Nobody was injured and nothing was damaged.  I don’t believe anyone was home, but there was one very pissed off Chihuahua that clearly did not approve of this landing location.  They guided the balloon further away from the house and then it was time to pack everything up. 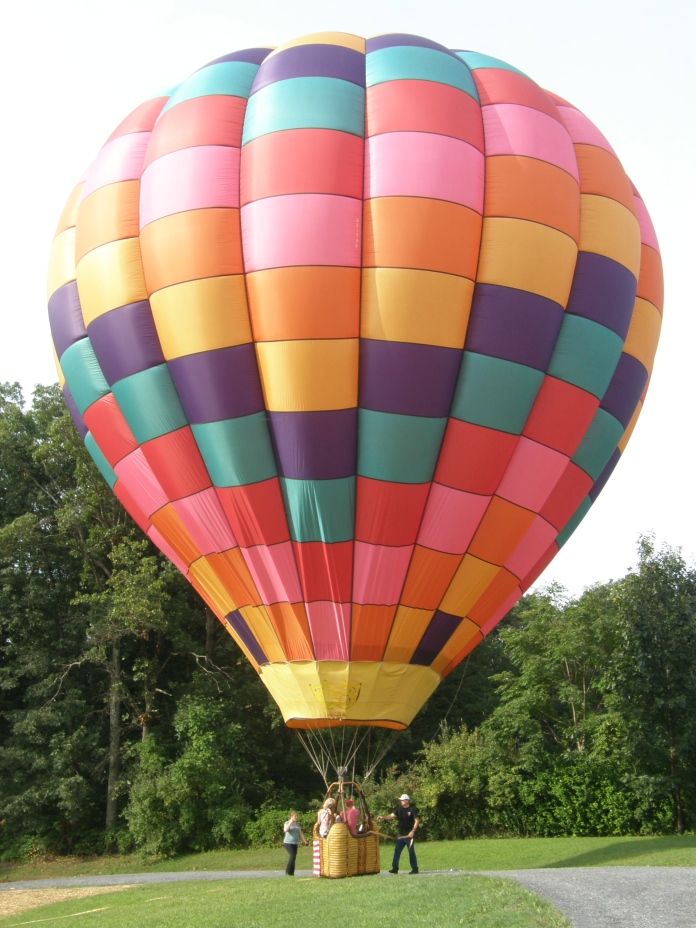 All in all, it was a very cool experience!

One thought on “Floating above Woodstock”