Just a short distance from Playa Coco, lies the La Flor Beach Natural Reserve. This beach is considered a sanctuary of nature because Olive Ridley turtles come to the beach en masse to lay their eggs. Thousands of turtles arrive at the same time, an event called arribadas, and each turtle will lay about 100 eggs. The eggs will hatch about 50 days later and swarm the beach. The arribadas increases the hatchlings’ chance of survival because when they hatch in huge numbers, they outnumber their prey making it possible for more of them to survive. Seven arribadas occur every year between July and January. Despite these numbers, the Olive Ridley turtles are still threatened, and in some places they are endangered. We were there very late in the season, so we didn’t see any turtles laying their eggs, but we did see a LOT of turtles hatching. We also witnessed first-hand just how difficult their initial journey can be.

Upon arriving at the beach, we paid our entrance fee of 200 cordoba each (about $8). We noticed there was a basket of baby turtles on the ground and we learned that these turtles had hatched too late in the morning, so the employees of the reserve collected them in the basket and planned to release them later in the evening (this would make more sense later). He told us if we came back around 6 p.m. we could watch these turtles being released. The picture below is blurry because the turtles were desperately trying to climb out of the basket and I was not allowed to use a flash.

We walked onto the beach and we were the ONLY visitors there. The beach was beautiful and it seemed like the Olive Ridley turtles had picked a fine nesting ground! We weren’t exactly sure what kind of show nature would provide for us, but in the meantime, we were happy to enjoy the view.

Rob was exploring the beach when he noticed birds congregating on the beach. He quickly realized that a nest of turtles was hatching and the congregation of birds was there for a feast. He called over Tami and I and our Tortuga Rescue began. 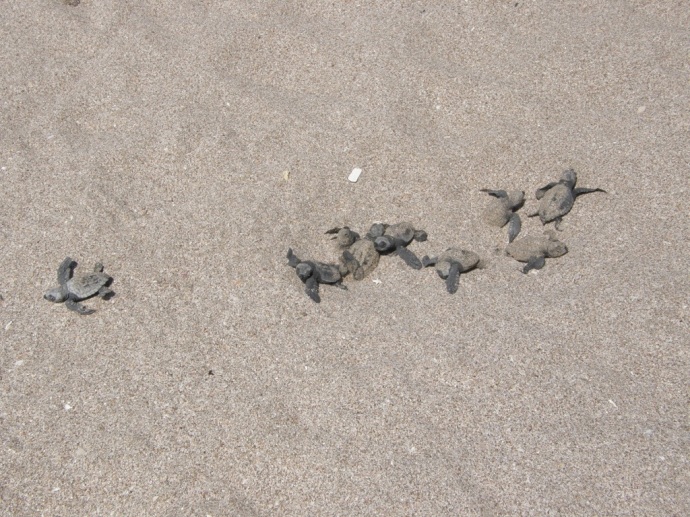 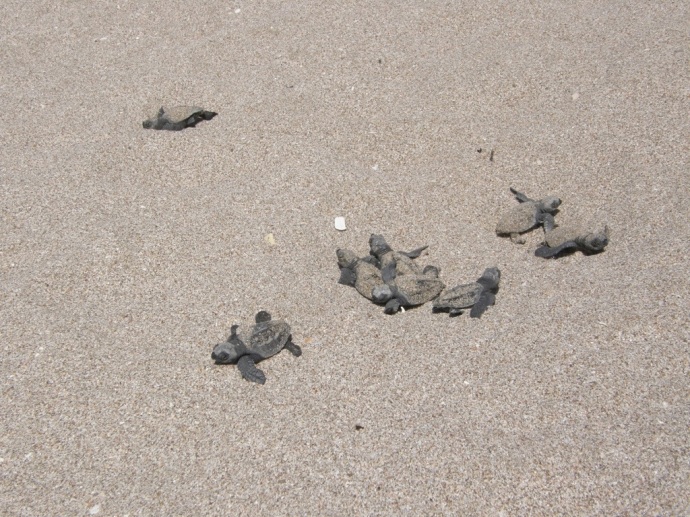 We scared away all of the land birds and we even had to scare away several crabs that popped out of their holes in the sand and tried to grab the baby turtles. Were we allowed to touch the turtles? Technically, no, we were not supposed to touch the turtles. I’m a fan of Darwin and I understand the “survival of the fittest” concept, but these little guys were just too cute and we felt like we had to try to rescue them. We found other nests that were hatching at the same time and it was beginning to get harder to keep the birds away, so we started our own turtle escort service. We were trying to get as many turtles safely into the water as we possibly could (even if it meant picking them up and racing them to the water ourselves).

So, we likely saved a large proportion of them from the crabs and the land birds. But, there was little that we could do to protect them from the sea birds (let alone all the fish that were waiting to eat them). The sea birds were swarming the waves and just picking off the turtles one-by-one. It was enough to get even me in the water to try to scare them off! I ended up in the water waving my arms around like a mad woman trying to scare off the birds. But the birds were relentless and kept dive-bombing the water, rarely ever coming out empty-beaked.

It was as amazing to see these little guys hatch and head for the shore, as it was disheartening to see how many of them didn’t make it. I was really glad we were able to witness these baby turtles digging their way out of the sand and I hope that we at least saved a few of them in the process. After all of the excitement was over, we decided to return to our condo, but we planned to come back to the Reserve for the evening turtle release. 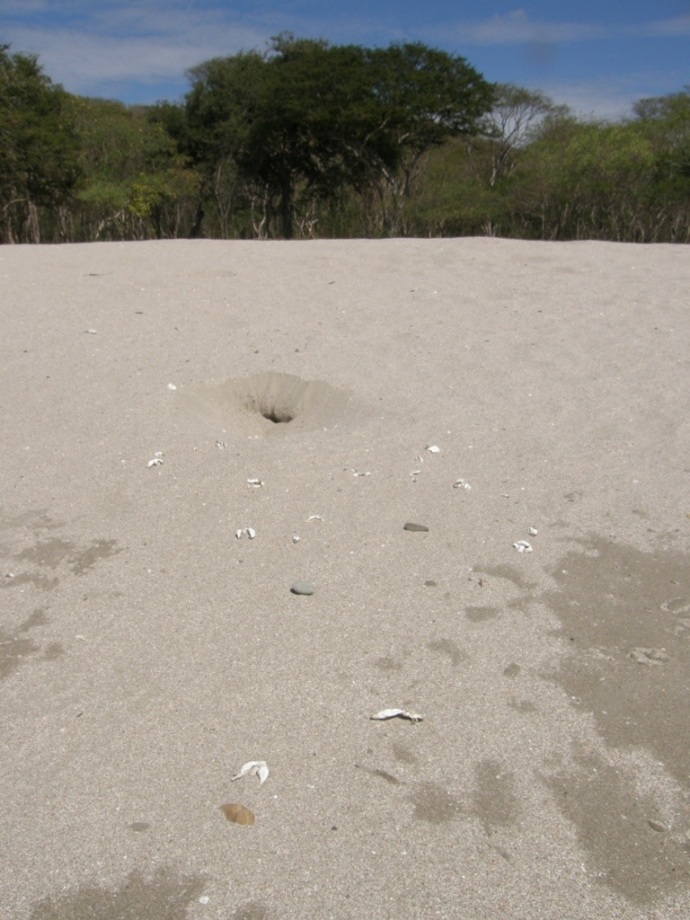 Remnants of a turtle nesting area