Last month, I wrote about inspiration after seeing the Honor Flight documentary. I had never heard of the Honor Flight Network prior to that point, but I immediately knew it was an organization that I would be proud to get involved with. And this past weekend, I escorted my very first group of Honor Flight WWII veterans!

I arrived at DCA on Saturday morning and obtained my Gate Access Pass (permits entry to the gates for personnel not actually travelling). Once at the gate, I met the 4 other local volunteers that would be escorting the Honor Flight for the day. In addition to myself, there were 3 active duty military members and one other military veteran.

As the plane approached the gate, the Washington Airport Authority Fire Department “saluted” the plane with their fire hoses!

Then, an announcement was made in the terminal about the incoming WWII veterans and asked the surrounding travelers to stand and greet the veterans as they came off the plane. The immediate wave of support was overwhelming! Everyone gathered around the gate and cheered on the veterans as they made their way into the terminal. It was very emotional and I was extremely choked up the whole time. Since I absolutely hate for people to see me cry, it took every shred of energy I had to fight back the tears. What can I say….patriotism makes me sappy. Even this tough girl has an Achilles heel.

We had two busloads of veterans, guardians and other volunteers that were all part of the SW Florida Honor Flight hub. Once we got everyone loaded up, it was time to visit the memorials. Our first stop was the WWII Memorial. The veterans all seemed in awe of how grand and beautiful the memorial was. I heard one veteran comment, “Something like this… I don’t mind our government spending my money on!” There were local groups of volunteers that were standing by to cheer for these veterans and welcome them to their memorial as they got off the bus.

While at the memorial, I walked around and offered to take their pictures. Some of the feisty veterans said they preferred to have a “pretty girl” in their pictures so they asked for me to be in their pictures instead, to which I happily obliged. A few of the veterans were even more flirtatious. I spent some time talking to a veteran named Lionel and when I mentioned my husband, he said, “You’re married? What am I doing wasting my time talking to you?” I told him I would let him know if things didn’t work out with my marriage.

In addition to visiting the WWII Memorial, we also visited the Korean War Memorial, the Vietnam War Memorial, the Marine Corps War Memorial, and Arlington National Cemetery to watch the Changing of the Guard. It was a lot for these senior veterans to do all in one day. It was enough to wear out even the young volunteers! But the veterans didn’t complain about being tired because for them, this was the opportunity of a lifetime and they didn’t want to miss a thing! 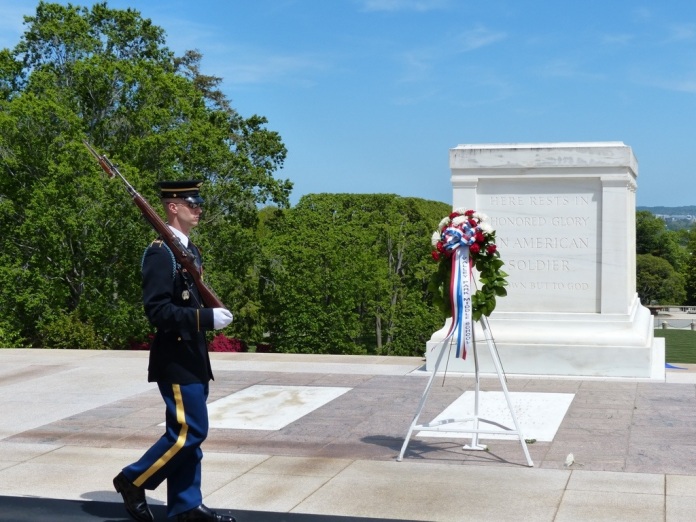 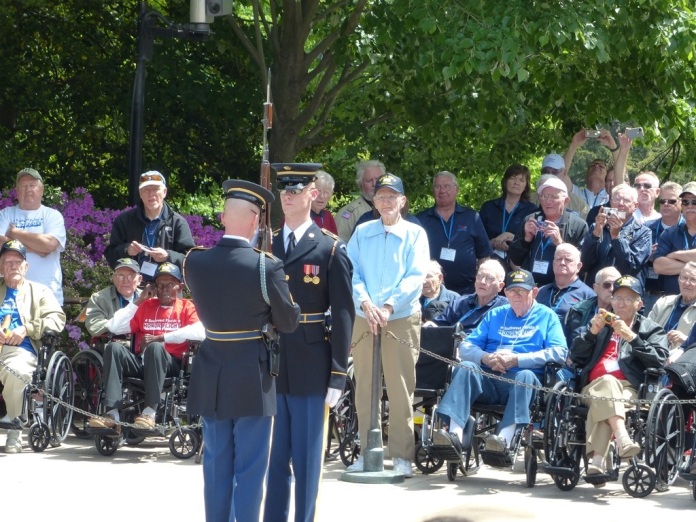 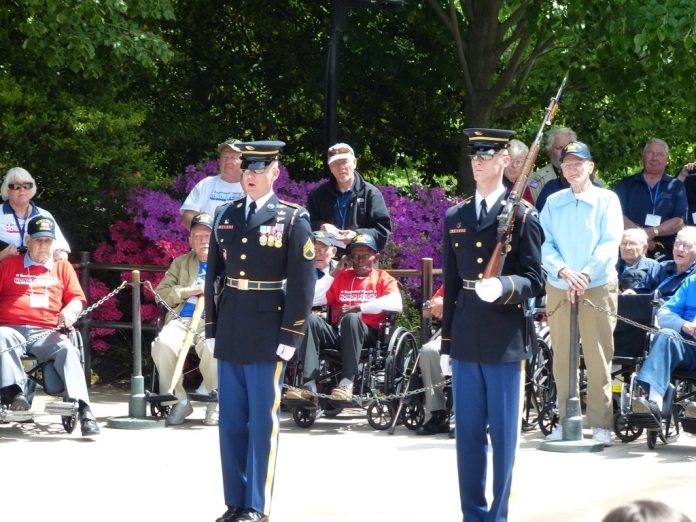 Of the 16 million WWII veterans, only about 2 million are still alive, and almost 900 of them die every single day! The Honor Flight Network is committed to flying as many of the surviving WWII veterans as they possibly can to Washington, DC so they can visit and reflect at their memorials before it is too late. If you live in the DC area and you would like to volunteer, please visit http://honorflightdca.wordpress.com/ to view the schedule of when volunteers are needed. If you are outside of the DC area, you can still get involved by volunteering with your local Honor Flight hub.

Editor’s note: I had volunteered with the expectation of being assigned to one veteran as his guardian with hopes of interacting with that veteran for the entire day. However, the 50 veterans that flew to DC from SW Florida were already assigned their personal guardians for the day. Their guardians assisted them in getting to the airport and made the journey with them from Florida. The role of the local volunteers was more of a floater/general escort. I was a bit disappointed that I didn’t get the one-on-one interaction that I was hoping for, but I was still proud to participate in such a worthy cause.