Two years ago, Rob and I were in San Diego so we visited the famous San Diego Zoo. While there, we saw this cheetah and this dog being walked around the zoo grounds together. Hmmm? I wondered how this unlikely duo ended up being walking pals.

And now I know the rationale behind my strange encounter.

Did you know that cheetahs apparently have a hard time doing the wild thing? According to this article, cheetahs are very skittish animals making it very difficult for them to mate. As a result, zoos have been pairing cheetahs with domestic dogs that act like therapy dogs. In fact, the San Diego Zoo has been pairing cheetahs and dogs for nearly 40 years!

How does it work?

The cheetahs are paired with a dog when they are very young and the cheetah learns to trust the dog. The dog’s reassuring body language is calming to the cheetah and helps ease it’s skittish nature. This relaxation helps the cheetah respond better with others of its own species; thereby making it easier to breed. Who knew dogs could be such an aphrodisiac! Feeling frisky? Need help getting your lady friend in the mood? Adopt a dog today!

It is not the end of the world. It is just the end of the 5,125 year cycle of the Mayan Long Count Calendar. However, not everyone is convinced that the world is still not going to end. Efforts to synchronize the Mayan calendar with our calendar could be off by a couple of days. Therefore, some people think we might not be in the clear until Sunday.

Whether you believe we are headed for Dooms Day or not, I thought today would be an appropriate time to post about my trips to two different Mayan ruin sites.

In December 2011, Rob and I were enjoying an Exotic Western Caribbean cruise. While in port in Cozumel we booked an excursion to visit Coba (which required a sickening ferry ride to the mainland). Coba dates back to about 600 AD. It was believed to have supported about 50,000 inhabitants, but was abandoned for unknown reasons. Coba was never discovered by the Spanish and remained hidden in the jungle until it was rediscovered in the 1890s. Most of the structures are considered to be in pristine condition. 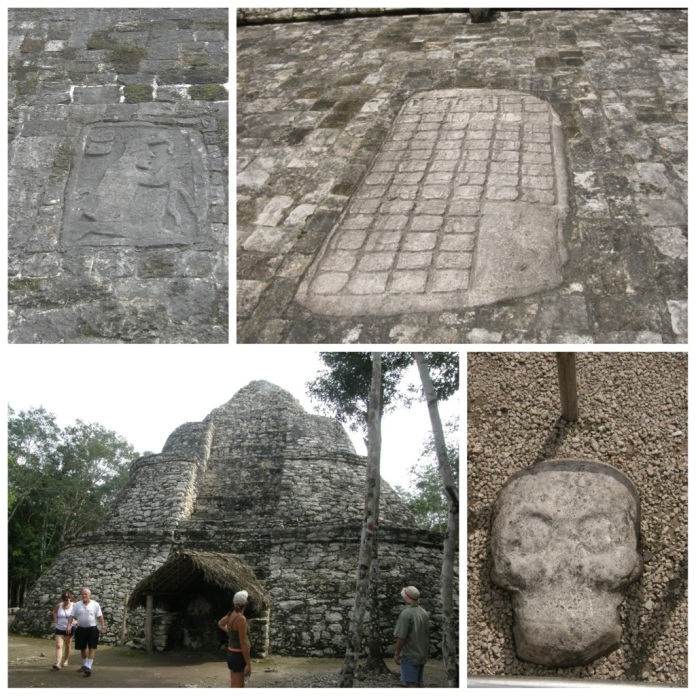 The largest structure in Coba is Nohoch Mul, which means “big mound.” This Mayan pyramid is 138 feet high and may be climbed by visitors. The climb up wasn’t too difficult, but it was strenuous enough. The view of the Yucatan jungle from above made it all worth it.

In February 2012, Heather and I were enjoying a relaxing beach vacation in Mexico. We decided to take a quick day tour to visit the Mayan ruins of Tulum. Tulum is nowhere near as old as Coba, as it wasn’t built until the late 13th century. Tulum was a seaport and it was the only Mayan city built on a coast. It is home to its own beautiful beach where visitors are welcome to take a refreshing dip in the sea. 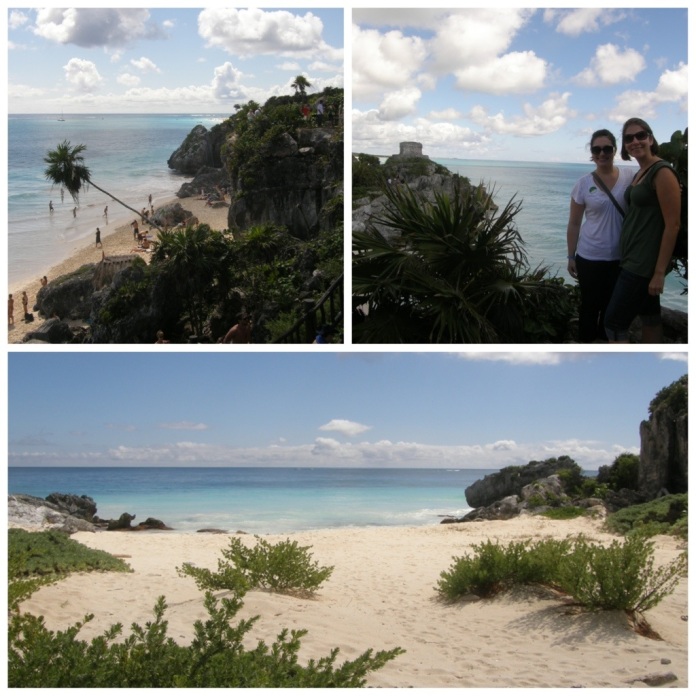 Tulum was one of the few Mayan cities protected by a wall. There are different theories about why Tulum was fortified, but there is little doubt about their desire to protect the seaport. Unlike Coba, Tulum had only 600 inhabitants inside its walls. So some people believe the walls were there to keep invaders from overtaking such a small population. Others believed that only priests and nobility lived within Tulum, therefore the walls could have been there to keep out the peasants.

Enjoy these pictures until Sunday when we will find out if the world truly will come to an end!

For as long as I can remember, I always wanted to go sky diving!  I didn’t really want to go through all of the hoops to get a personal certification in order to sky dive solo.  No, I was perfectly content doing a tandem jump with a well qualified instructor.  Let’s face it, the sensation of free falling would probably be the same regardless of whether or not there was a big man strapped to my back, right?  And to be perfectly honest, going solo appears to give you an “out” to back out at the last second; I didn’t want that option. Going tandem relieves you of that moment of hesitation because the guy strapped to your back is jumping, and that means you are going with him.  I was completely okay with losing that “out” because the thought of possibly backing out at that last second was just too embarrassing.

You might be curious about the title of this post, so let me explain.  One of the reasons it took me so long to finally go sky diving was due to the cost.  It always seemed too expensive, so I kept putting it off.  Then a little company called Groupon came along and they started offering huge discounts on just about everything you could imagine.  As a general rule, thriving businesses don’t need to rely on Groupon.  Even still, I thought the deal was too good to pass up, so I jumped on it.  More on this later…

Rob was on board to try this with me, so in September of 2011 we went for it.  We arrived at the sky diving location and my first thought was that things didn’t seem nearly as organized as I thought they would be.  But I am an organization freak, so it is always hard to tell if my standards are just skewed.  There were a lot of people in line ahead of us, so we were going to be waiting there for quite some time.  Excessive waiting is always really good for calming the nerves! (Note sarcasm).  Several hours later, it was almost our turn.  Our names were finally on the board.

We were harnessed up, and neither one of us was going to back out.  Before we knew it, we were in the tiny little plane and we were taking off.

I’m not going to lie…my nerves were through the roof!  But I was determined to do this, so I tried not to think about it and just concentrated on breathing instead.  Once we reached altitude, Rob was the first one out of the plane.  Just a few seconds later I was out of the plane as well.

The initial feeling of free falling was indescribable.  And with that much adrenaline pumping through my veins I probably wasn’t in the right state of mind to describe what I was feeling anyway.  And then came the moment of truth…phew, my parachute opened!  Knowing that I was NOT going to plummet to my death, I could then relax and enjoy the ride.  It was truly exhilarating. 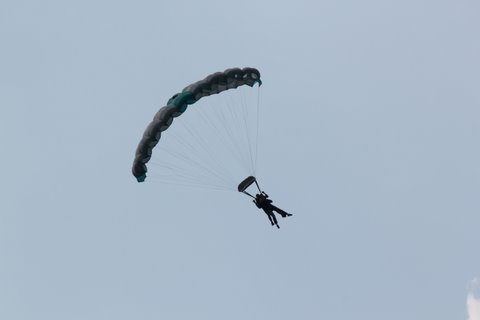 Now comes the really scary part.  Below is a picture of both of our parachutes.  Rob’s parachute is the one on the left and you can see in this picture that his chute only opened 75% of the way!  Um…what’s that old saying?  Oh yeah…you get what you pay for!  Note: probably not the motto you want intermingled with your sky diving experience. 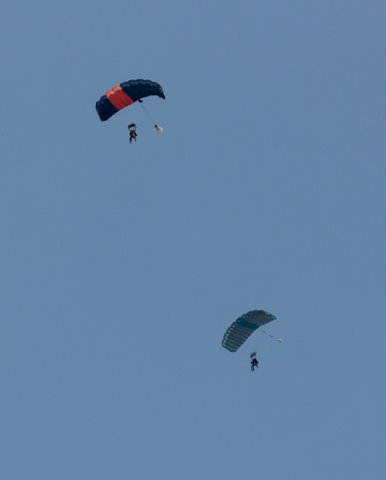 Despite this major SNAFU, Rob’s instructor was able to land them safely, but it was no easy task.  The parachute was much more difficult to control, which meant Rob didn’t get the opportunity to navigate and do loops like I did.  Rob knew that something wasn’t quite right, but he didn’t realize the specifics until we looked at the pictures.  “Oh, that explains why he chewed out the parachute packers as soon as we got on the ground!”  Once again, not something you want to hear while sky diving. 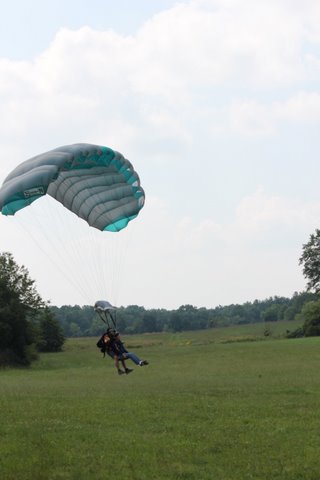 We didn’t spend the extra dough to video our entire sky dive.  Instead, we have this awesome amateur video shot by a fellow sky diver on the ground.  The total time of our descent was probably around 10 minutes or so.  This video only captures about the last 4 minutes of our descent.  But prior to that, we were just two little specks in the sky anyway.

When it was all said and done, we got to add our names to their wall.  Next up…discount hot air ballooning!  No seriously, we did that too.